Selection of Fiber for Geotextiles

Different fibers from both natural as well as synthetic category can be used as geotextiles for various applications.

Natural fibers in the form of paper strips, jute nets, wood shavings or wool mulch are being used as geotextiles. In certain soil reinforcement applications, geotextiles have to serve for more than 100 years. But bio-degradable natural geotextiles are deliberately manufactured to have relatively short period of life. They are generally used for prevention of soil erosion until vegetation can become properly established on the ground surface. The commonly used natural fibers are:

These are subtropical bast fibers, which are obtained from their plants 5 to 6 times a year. The fibers have silky luster and have white appearance even in the unbleached condition. They constitute of pure cellulose and possess highest tenacity among all plant fibers.

This is a versatile vegetable fiber which is biodegradable and has the ability to mix with the soil and serve as a nutrient for vegetation. Their quick biodegradability becomes weakness for their use as a geotextile. However, their life span can be extended even up to 20 years through different treatments and blending. Thus, it is possible to manufacture designed biodegradable jute geotextile, having specific tenacity, porosity, permeability, transmissibility according to need and location specificity. Soil, soil composition, water, water quality, water flow, landscape etc. physical situation determines the application and choice of what kind of jute geotextiles should be used.

In contrast to synthetic geotextiles, though jute geotextileas are less durable but they also have some advantages in certain area to be used particularly in agro-mulching and similar area to where quick consolidation are to take place. For erosion control and rural road considerations, soil protection from natural and seasonal degradation caused by rain, water, monsoon, wind and cold weather are very important parameters. Jute geotextiles, as separator, reinforcing and drainage activities, along with topsoil erosion in shoulder and cracking are used quite satisfactorily. Furthermore, after degradation of jute geotextiles, lignomass is formed, which increases the soil organic content, fertility, texture and also enhance vegetative growth with further consolidation and stability of soil.

There are two most important types of polyamides, namely Nylon 6 and Nylon 6,6 but they are used very little in geotextiles. The first one an aliphatic polyamide obtained by the polymerization of petroleum derivative ε-caprolactam. The second type is also an aliphatic polyamide obtained by the polymerization of a salt of adipic acid and hexamethylene diamine. These are manufactured in the form of threads which are cut into granules. They have more strength but less moduli than polypropylene and polyester. They are also readily prone to hydrolysis.

Polyester is synthesized by polymerizing ethylene glycol with dimethyle terephthalate or with terephthalic acid. The fiber has high strength modulus, creep resistance and general chemical inertness due too which it is more suitable for geotextiles. It is attacked by polar solvent like benzyl alcohol, phenol, and meta-cresol. At pH range of 7 to 10, its life span is about 50 years. It possesses high resistance to ultraviolet radiations. However, the installation should be undertaken with care to avoid unnecessary exposure to light.

Both polyethylene and polypropylene fibers are creep prone due to their low glass transition temperature. These polymers are purely hydrocarbons and are chemically inert. They swell by organic solvent and have excellent resistance to diesel and lubricating oils. Soil burial studies have shown that except for low molecular weight component present, neither HDPE nor polyethylene is attacked by micro-organisms.

Polyvinyl chloride is mainly used in geo membranes and as a thermo plastic coating materials. The basic raw materials utilized for production of PVC is vinyl chloride. PVC is available in free- flowing powder form.

Ethylene copolymer bitumen membrane has been used in civil engineering works as sealing materials. For ECB production, the raw materials used are ethylene and butyl acrylate (together forming 50-60%) and special bitumen (40-50%).

Sealing membranes based on chlorinated poly ethylene are generally manufactured from CPE mixed with PVC or sometimes PE. The properties of CPE depend on quality of PE and degree of chlorination. 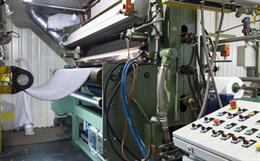 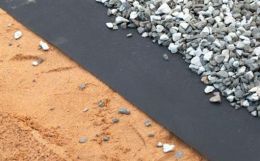 Geotechnical and geo synthetic textiles surging ahead in India 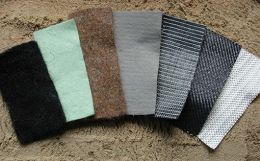 Engineering Use of Textiles in Geotextile